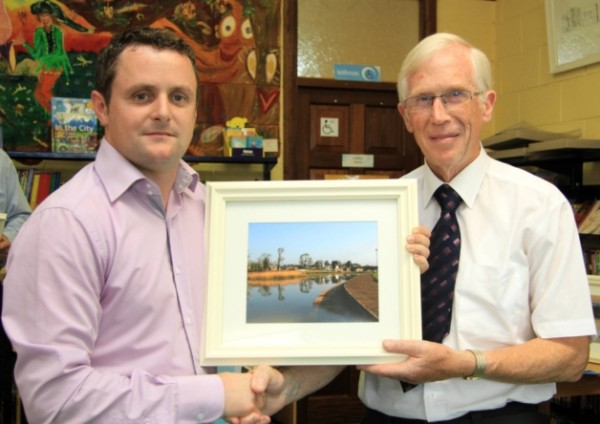 They arrived on a sunny day and a very enthusiastic showcase to explain the Lanesboro Tourism Co-Op Society.  This took place at the local library, and the presentation highlighted the efforts made by the society to increase tourism in the area of Lanesboro. Seadna Ryan, who presented, stated that Lanesboro’s “calling card”  was its schools, facilities and landscapes.

Plans by the area to boost foot fall include:

Members from all parts of the community were present. Among them were the local scouts who secured an old barge and its next project was to restore her to her former glory. Liam Kelly, Scouts Leader told judges:

This barge – the 113B- was constructed in Dublin in 1937 and was used on the canal until the late 1950’s. It was used by CIE from 1960 – 2010 on Lough Ree when it was then decommissioned. We now have it in our possession – thanks to Waterways Ireland – and we are going to restore it. It will become the mother ship of the Royal Canal and will be used for local trips and to support the kayakers, canoers and all those who engage in watersports locally.

Following the presentations, some of the judges were brought on a  tour of the area, while others were entertained by the playing of the harp by Edel Loftus and her daughter. Local Margaret Nahilly also read a poem entitled ‘Woodland on My Doorstep”.

“There Is Such Progress Here And It Is A Wonderful Place To Live In&#...
Scroll to top